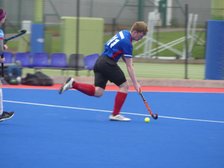 Nice and early on a sunny Saturday morning, US ladies made their way through the Varsity crowds to meet their well-known opponent, Fareham 3s.

Determined to make their absent captain proud, under the leadership of Brooke Wain, US ladies started the game strong. Despite a very high press from Fareham ladies, we did not conceive a single goal during the first half, which ended 0:0. A rare treat from US ladies, as our signature move is to turn up half asleep and usually conceive a goal within minutes from the game start.

The second half was even more nerve wrecking with so many amazing half-pitch runs by Heather Craig, but unfortunately no luck with scoring. Our luck turned by a fortunate deflection off Brooke's pass by a Fareham player into a post and pass the keeper. 1:0 US ladies!

And then Fareham scored...once...twice... 1:2 with about 10 minutes until the game end. But we did not give up, with an amazing play straight from the defence, through the middle to attackers, Michaela Chandler's strike was unstoppable and the score was 2:2.

Aggressive until the end, we did not manage to score again. However, we were all very pleased with the end score and our performance, happy to get some well-deserved food.
Big thanks to our sideline supports who were heard on the pitch through the entire game!

MoM - almost unanimously Rhianna Robertson for being an absolute life-saver in the defence - stable and calm enabling us to confidently move the game forward. Also, special mentions to Heather, Brooke and Anna

DoD - Ana Mikic for getting a green card (whoops, definitely deserved though)

Absolutely great game today from the mens 2s, everything they had been working on coming together nicely.
After a nice and quick start to the game, with quality passing and great plays, Robbie Taylor slotted one past the keeper 1-0. After that, some game saving tackles from Sebastian Hampson and some amazing saves from Lee Winter. However unfortunately one of their players finally managed send the ball in, 1-1. The game restarted and a few minutes later, after some cracking plays in the midfield, and some quality skills, Olly Saunders smashed one in 2-1.
Then fashionably late, two "extra 2s players" turned up on the ferry, but 5 mins before half time Max managed to take one of them out....and then himself onto the bench with a yellow.
Half time 2-1

2nd half starts and despite US's best effort from their seemingly impenetrable defensive line, 2 goals managed to slip past them, both from the extra players....3-2.... but that didn't stop the US. Great team spirit lead to some brilliant return attacks resulting in a number of attacking short corners, with only 15 mins to go one of their players kicked the ball of the goal line, penalty stroke it was, put in the top left by Max, 3-3.
Knowing they could get the win US pushed hard, not giving up, which resulted in Darren Bendell getting a great touch and then slipping the ball past the keeper, 4-3. Game won.

Another great game, and all of the progress from previous weeks paying off. Thanks to all that played today.